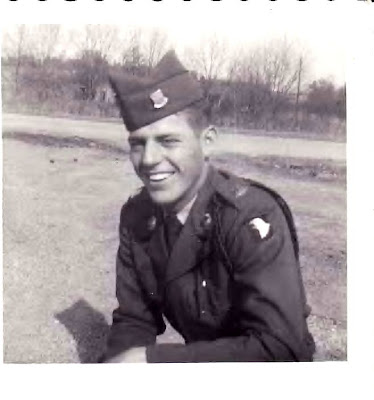 Seventy-six years ago today my father was born in Mobile County Alabama. He grew up in southern Mississippi-Pascagoula to be exact, with an alcoholic father, who was a very stern and strict disciplinarian. He left home at a very early age, and had a rough time of it. He used to work on farms, shine shoes, anything he could do to get by. During the time he was growing up, times were very hard, and the 50's ushered in the age of Rock and Roll. He met my mom, and married her in 1954-after knowing her for only 6 weeks. It lasted over 50 years, and only ending with his passing.

I remember growing up, he was very strict, and sometimes even mean-but I still loved him. He was a lot of fun too. Because he had relatives in Alabama and Mississippi-we always went there for summer vacations. We could stay AND eat cheap-and that always included either staying at the beach, or visiting it while we were there. My fondest childhood memories are those times I spent at the beach; bodysurfing, fishing, learning to crab, and back then you could ride your dune buggies on the sand dunes. No one cared about the sea oats, or protecting them, no one thought much about the erosion of the sand dunes. When we would travel to Mosspoint, Gulfport and Biloxi-Dad would point out the damage that had been done in 1969 by hurricane Camille, to the grand old homes and buildings along the coast. The only other one since that has done as much damage to those same areas is Katrina in 2005. We used to feed shrimp to the seagulls off the pier while fishing. Just the simple smell of Coppertone can evoke those powerful memories, even though back then no one knew what we do today about skin cancer. And being a redhead, I had my share of bad burns-but it didn't stop us from going to the beach! Dad passed away 5 years ago as of this January-11 days before what would have been his 71st birthday. I miss him.............so Happy Birthday Dad~

Popular posts from this blog

October 12, 2010
Today- Tuesday-October 12, 2010- (1 Corinthians 13:1-3) we will hold another medical clinic, where we will see and treat over 200 patients with the help of some doctors and nurses from Haiti. Patients will also receive food, and hear the Gospel. Many are saved through this ministry, which is totally a God thing-because Voodoo is very big in Haiti.  But through our team voodoo priests have been saved!! Isn't that amazing?  I think it is-so I hope I get to witness God working to make that happen! Please pray specifically for- ·      That every action, word, and thought will be done in love~ ·     For God to multiply their resources so that all needs will be met, both spiritual and physical        Miraculous healings and salvations     Talk to you Wednesday!!     Be Blessed~      Rhonda
Read more

January 01, 2010
My New Year started off GREAT! I've been taking a lot of pictures and loving it.  I'll post some here soon-so you can feast your eyes on the loveliness and baby sweetness!!!  Hope your New Year has started off well too! Rhonda~
Read more

So, maybe they make you wait so long to give you a "definitive" diagnosis, so you have time to get used to the fact you have it. The neurologists told me prior to being discharged that only time, and how much of the sensation in my left side returned would confirm my diagnosis and the type of MS I might have. But they wrote it in my chart. All of it. Transverse Myelitis. Left Sided Numbness. Neuropathic Pain. and MS. Fast forward from my discharge to my follow-up in the MS clinic, where I saw a colleague of the doctors who not only saw me inpatient, but also diagnosed me. He says he doesn't think I have MS, he's not concerned with the old lesions on my brain, but very concerned with the active one on my spine. He wants me to see the neuro-immunologist here in Charleston (like the only one in SC, and apparently the MS expert), and his soonest opening is early October. WTF?!??!?!  My appointment has since been moved to early August due to a cancellation. Meanwhile,
Read more